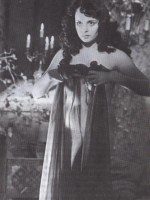 Финская актриса
Finnish actress. She is best remembered for her role as the witch in a Roland af Hällström film Noita palaa elämään. The nudity scenes of that film provoked a stir at the time, but her acting skills were questioned by some critics. Mane made only five film appearances during her career. She died after a short illness in 1974 at the age of 44.